bookings@lantern.com.au
02 64576600
Girls on Tour: Shredding With the Best of Them
August 7, 2014
Who says having a baby is the death of your own social life and the end of life as we know it? Four adventurous new mums leave the dads in charge of nappies and the Nurofen and head to Thredbo Resort to give the traditional ?boys weekend? a run for its money. The maths is quite simple. Four chicks = one skier + two snow boarders + one non-skier. Where do you go? Thredbo of course, there is always something for everyone. The theme of the weekend is ?let off steam?. To get in touch with their inner mad-hatter and come home revived and ready to get back on board with everyday life a better and fresher version of before.

It started on Thursday with drinks at The Pub (The Alpine Hotel) to accompany burgers and schnitzels and be imbibed with fresh alpine air. A brisk and short walk back to the apartment and a couple of celebratory drinks before hitting the sack. It?s a clear but windy day Friday morning and 8.30am sees three girls hit the slopes. Kristy (first timer) hires gear and organises an 11.30am lesson and lift pass. A nice late start when all you have to do is saunter down the hill without ski boots, at your leisure. The three mountain goers, ?Amanda, Lauz and Kaz ?drop easily out of the wind once off the chairlift, and work their way from Crackenback to Meritts, with a short interval for hot chocolates at Meritts Mountain House. High Noon and Dream Run were the pick of the runs for the day. Down to The River Inn for falafel wraps and massive German beers for lunch. Good pit stop for a big thirst. Friday night saw the girls head out to seek the tastiest drinks around Thredbo Resort. It is a pub crawl to rival any boys on tour, of which there are many. Then it was off to the Knickerbocker, one of top picks for restaurants?in Thredbo, for "an awesome dinner" of beetroot ravioli and fish of the day and some very tasty pink lady Wild Brumby schnapps. 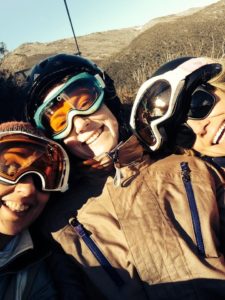 Post-Knickerbocker, the place to be was the Denman hotel for drinks and live music. The pick of the drinks of the night was Caprioskas ?yummy depending on who made the drink?. Closing time at the Denman propelled the girls down to the Keller Bar, ?quiet but no queues at the bar?. A good place for shots. Then home for some well-earned zzzzz. Saturday morning, the girls woke in varying states of disrepair, depending on their personal level of exuberance the night before. Kristy, keen for a bit of non-ski action, booked a massage at the Denman and rated it ?unreal?. Fantastic to have massage services within walking distance and definitely something to have on speed dial. Despite snow and rain, Lauz and Amanda headed up the mountain at around 9am to get their snow boarding prowess up to the same speed as their apr?s-ski antics. A few wrong turns later and ?Michael?s mistake? could be named for good reason (and could have a few female names added to it). The great thing about Meritts chairlift is that non-skiers who prefer the apr?s-ski scene over Michael?s mistake can join you up top for lunch or coffee. Kristy made good use of this and enjoyed pizza up top in heavy snow with the girls before heading down the mountain. The others used their snowboards but wished they?d taken the chairlift down with Kristy. ?Thighs and calves were aching, we were nearly crying?. Sounds like a massage at the Denman or some cool down stretching is just what the doctor ordered. Saturday night?s apr?s-ski action was full of good intentions for staking out a scene on the nightclub floor, but ended in a few drinks in and an early-ish night for the girls. It promises to be an annual event, with the lure of capriska, berocca and good looking instructors to help ease the pain of learning to master the slopes. 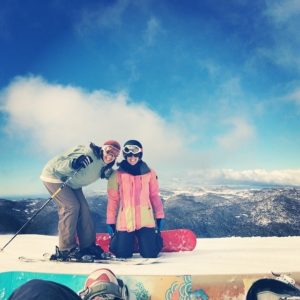 That?s the beauty of Thredbo Resort. It?s all the action you pack in on top of and at the bottom of the mountain, and all over the hill in between. The Lantern Thredbo Apartments provides a wide variety of one to four star self-contained accommodation, perfect for a road trip with the girls or guys. Make it an option to eat in or out, drink in or out, and walk everywhere so you don?t have to start pulling straws to designate a driver, everyone can be in on the fun. Prices start from $165 per night per person for 2 nights accommodation (quad share). For the best non-skiing activities on offer at Thredbo Resort consider the following: - Winter fishing -?Leisure Centre -?Horse Riding - Bars and Shopping -?Thredbo Museum For the best stops between Sydney to Thredbo check out: -?Creative pit stops -?Coffee and dining options
Interschools Snowsports at Thredbo Thredbo Trout Fishing: The Hottest Place to Meet Your Future Wife