bookings@lantern.com.au
02 64576600
Thredbo Ski Runs for the Whole Family
August 21, 2015
If you haven't been to Thredbo for a while, or not at all, you may be wondering which runs are appropriate to take your intermediate skier family members down. Sure, if you have all week it can be fun to try every run for trial and error but if you have just a couple of days or you're the 'research' kind of folk it's always good to get some info first hand from families that have just done it. Here are some tips on what to expect on a few of our family's favourite Thredbo ski runs.

Download your trail map to your phone or go old school and take your paper trail map in your pocket. Collect one at the ticket office at the base of the mountain. Each run is rated: - Green Runs are ?easiest? - Blue Runs are ?more difficult? - Black runs are ?most difficult? - Yellow runs are for ?first timers?.

Entry points for the Thredbo chairlifts

The Base lift stations in Thredbo are: ? Valley Terminal in front of the village which is generally for accessing steeper terrain and the Basin T bar area. ? Friday Flat which is Thredbo's purpose built learning area that also houses the Snow Sports School and Thredboland. ?The lifts here access the beginner terrain and also the intermediate areas above.? The Kosciuszko Express chairlift A 4 seater chairlift from Valley Terminal that begins at the base of the mountain. Walk through the little retail arcade from the ticket office next to the pedestrian footbridge and the stairs. The chairlift is right in front of the coffee and the snacks and the sun lounges which you can eye off ?for later use. 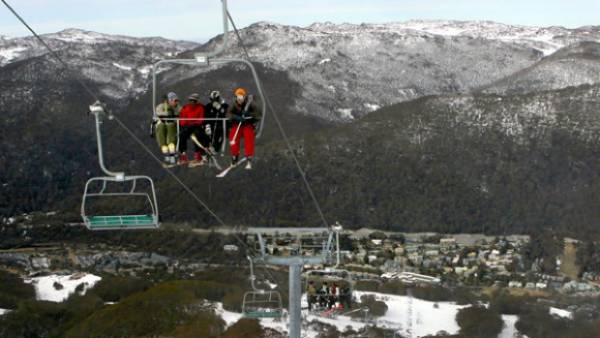 Gun barrel Express A 4?seater chairlift from Friday Flat that takes skiers and boardersup to a landing point to access high noon, the Merrit's Cruiser intermediate area and dream run intermediate (rated blue) trails. Snowgums Chairlift A 2 seater?from Valley Terminal?that lifts users up to a landing point to access beginner village trail ( rated green) or some more advanced runs (rated black) on the Crackenback Supertrail. Merritt's Chair? A 2 seater from Valley Terminal that lifts people over to?a mid station near High Noon run and then on to the base of the Merrits Cruiser intermediate area with a great?variety of blue and green runs.

This is a great one to start off with or end of the day on, or because it?s 3.7km long you can just enjoy it at any time of the day. There is plenty of variety on this run. On the top section of the run the trail is slightly narrow and weaves left and right, enough to thrill the kids but they do have to concentrate so it's not the run to take your complete beginner children on until they have mastered their speed and can control their skis to stay in their intended path. But if they're beginners with confidence and some level of skill from lower intermediate ?they should be able to attempt this track because in my opinion this section is the most challenging. The day we were there, some bumps were encountered straight after the weaving upper trail section as it was the end of the day so it had been skied over. These bumps opened up to wide open runs?where our children deliberately sought out little jumps and headed straight between the trees on the edges to weave through ?under trailing branches. If they want to go over every bump and jump they can find you may prefer the wide open paddocks and just some nice sun on your face.

My caution with Australian trees are that branches are very tough and can cause injury. My husband has a 15 year old shoulder injury from running accidently into a tree at top speed. I'd rather my kids didn't seek out branches and trailing leaves to duck under, and this is my personal caveat so where possible encourage the kids for the wide open spaces. 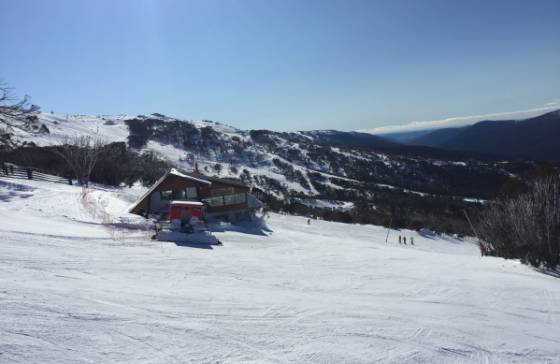 After these wide sections there is a choice of where to go next. You can go through the terrain ?park at the bottom of the run. My children (aged six and eight) didn't jump the rails they just enjoyed rolling over the jumps. They do have to be confident skiers for this. But they certainly can enjoy the challenge and if it's not very crowded it's super fun for them. Adults can ski next to the jumps to keep an eye on things like the fun police we are genetically pre-disposed to be. We were there at the end of the day on a Friday and it wasn't very crowded on the super trail possibly because the adults had worn themselves out skiing and snowboarding for the day, they were relaxing in the sun lounge chairs at the bottom of the run, or were enjoying the tunes of the Apres Ski party at the Alpine Hotel Poolside with outdoor fire pits and excellent DJ's playing most afternoons??after 3 PM.

This was another of our favourite runs and it was a favourite of a 72-year-old man I went up with on the T-bar who skis Thredbo all season on his $399 seniors age 65+ season pass (2016 season also). Exhibition had nice soft snow, nice open spaces, some bumpy sections and some trees at the bottom. 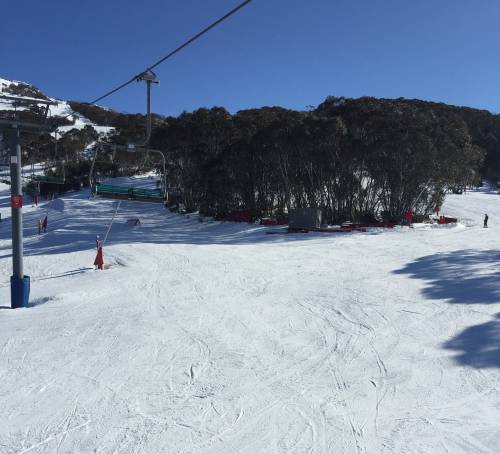 Next to Sponars T- bar were some nice wide open bowls?of snow on Ego Alley, some trees at the bottom and some interesting trails accessible from here including Bunny Walk and Catwalk?(rated green) down to the base of the mountain.

My kids are obsessed by anything resembling half pipes so down the bottom on the left-hand side on Lenny's Leap were some interesting tracks that the kids sought ?out over and over again. The t-bar lift up gave them ample time to talk about the strategy for attacking the run again. It was sweet to watch two little boys talk and gesticulate excitedly about the environment surrounding them. ? 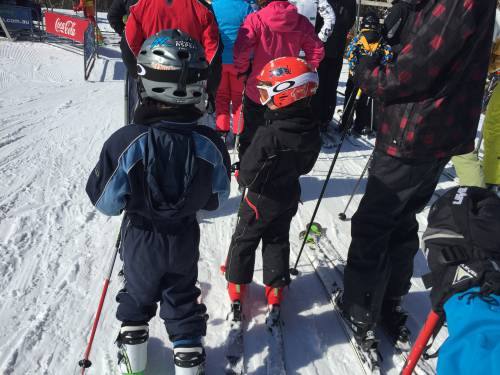 From Anton's T-bar the 3km long run High Noon is accessible by taking the trail at the left?just?above the base of the T Bar.??It is a long run with some steeper sections but it's not too daunting for intermediate skiers or snowboarders. It joins down the bottom with Friday Flat the beginner area so it's a good meeting point if you have any beginner family members who are on Friday Flat and you want to have have lunch with them for a hot chocolate.

As mentioned, this is a purpose built?slope for beginner skiers and boarders. The Easy Does It chairlift is aptly named because it is very slow going, so doesn't freak people out. 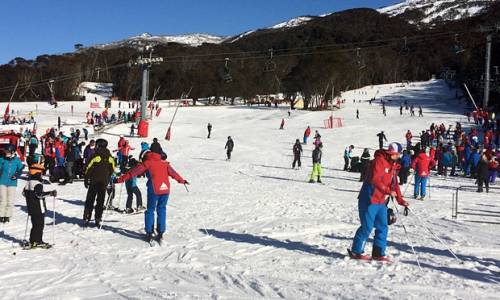 The lifties (lift operator staff) at the top of the Easy Does It are active in scanning the faces and body language of chairlift uses in case anyone is nervous about getting off the lift. You can either tell the lifties you need help getting off, or they generally spring into action if there's any hesitation from people anyway. I was on the chairlift with a couple of nervous young snowboarders on their first time and without any prompting the lifties leapt in to help them get off and then offered plenty advice on where to go next.

My youngest enjoyed going through the translucent tunnel through the forest that transports skiers and boarders to a run via a magic carpet or conveyer belt. The tunnel is called The Burrow and was exciting in itself, especially as you could see through the walls to all the trees. On the other side of the borrow is a gentle run home down to the base of Friday Flat which is good for beginners when they get the confidence up to try the next step up from the run next to Easy Does It chair.

This is a nice steady slope on a wide open bowl?down to The Basin t-bar. It is a fine lift for upper-beginners (rated green) and intermediates. There is a very slightly steeper steeper incline at the base of the run just before the skiers and boarders get themselves back into the t-bar queue.

If you have not yet booked your snow holiday accommodation call the Lantern Thredbo Apartments (02) 6457 6600 and they will organise a self-contained apartment for your clan. All apartments will have cooking facilities and washing facilities or you can put up with stinky socks for more than a day or two.
9 Fun Kids Activities To Do With a Toddler at Thredbo Snow Season 3rd Night Free