bookings@lantern.com.au
02 64576600
Introducing Snowy Ride for Thredbo Motorbike Enthusiasts
October 29, 2014
At first glance the Snowy Ride looks like a biker convention, but it?s not. It?s a motorbike enthusiast?s awesome weekend of fun and activities based in and around Thredbo. [caption id="attachment_7563" align="alignleft" width="300"] 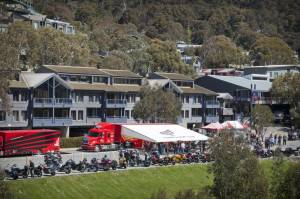 Gathering at the checkpoint[/caption] The Snowy Ride is in its 14th year and is for a very good cause. Open to anyone with a motorcycle licence and the desire to participate in a long distance bike ride, all funds raised go directly to the? Steven Walter Children?s Cancer Foundation (SWCCF) for research into child cancer. Unlike the Sydney to Wollongong bicycle ride or the Sydney Running Festival, the Snowy bike ride is fairly flexible with its start points, and not so much about the A to B. The difference in this event is that the ride uses checkpoints for motor bike riders to pass through (Adaminaby, Dalgety, Berridale, Jindabyne, Cooma, Bombala, Charlotte Pass and Thredbo) as long as riders arrive in Thredbo by 4pm Saturday 1st November. The Snowy Bike Ride If you are familiar with the locations of the checkpoints, they appear to weave a thread through each town that you would not ordinarily drive to get from the major cities to the snowy region. [caption id="attachment_7564" align="alignleft" width="300"] 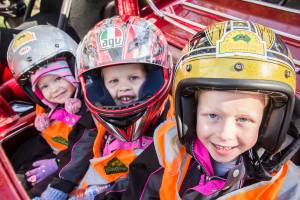 Keen supporters[/caption] Kylie from the Steven Walters charity explains, ?These particular roads are known as good riding roads for bike riders, it?s the winding mountain roads that are attractive to riders, not the long straight roads?. She explains that the checkpoints are not just locations to mark off riders, but rather serve as smaller community events within themselves that the people in those towns really look forward to. ?The local school communities organise barbecues and raise funds for their own schools. It?s really fantastic?. Motorbikes galore There are plenty of bikes available to look at for bike enthusiasts, as well as a low speed test at Bullocks Flat and lots of merchandise. The raffle available this year is a limited edition Fireblade motor bike (one of 30 retailed in Australia). Raffle money raised all goes to the Steven Walters Foundation. Snowy Hydro program Each year the Snowy Hydro Family Program pays for families of children undergoing cancer treatment to enjoy a nice long weekend in Thredbo for the event. [caption id="attachment_7565" align="alignleft" width="300"]

The navy joins in[/caption] The children enjoy a break from treatment and the parents get a little time off from being carers as the children get partnered up with a buddy over the weekend. Kylie says ?The kids have a ball. The navy brings a helicopter down for kids to see, there?s lots of things for them to do?. Snowy Hydro has supported more than 60 families in this program in giving them a trip to the Snowy Ride free of charge. Fantastic all-ages weekend The charm of the Snowy Ride event, beyond the ride for motorbike lovers, are the activities over the ?whole weekend, to be enjoyed over an easy stroll around the village in an absolutely picturesque setting. Activities are mostly all-ages, which is great for families wondering if the event is good for children. There is a Halloween Night for the Kids (Thredbo Alpine Hotel Friday 6pm), rides up to Eagles Nest on the chairlift and fun rides on the toboggan next to the tennis courts for the whole family (tickets available in the Snowy Ride merchandise store). [caption id="attachment_7566" align="alignleft" width="199"] 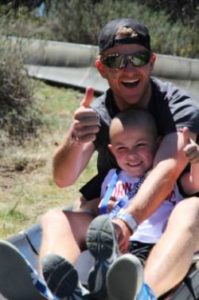 Fun on the toboggan[/caption] For the adults a concert by former Angels, Australian band Brewster Brothers (Village Square Saturday 9pm). Kylie takes her kids down to Thredbo for the weekend each year and they love to stroll around and enjoy the entertainment and the and activities on offer and the playground and pool. ?It?s a really nice atmosphere. We try and make it as kid-friendly as possible?. Raising Money If the Steven Walter Children?s Cancer Foundation? appeals to you as a worthy cause to donate to there are two ways to do it. You can enter the ride on the day for $60 without the need to actually ride a bike, but the entry fee automatically puts you in the draw to win some pretty cool prizes announced on the day, as per the competition rules stipulate. Or you can just go to the donate button (top right hand side of the page) of the charity and donate however much you like. Success Story The event in 2013 successfully raised $300, 000 for the charity from over 3000 registrations. They will hopefully raise something similar for this year. The event has a loyal following of people who enjoy coming down for the event, but there?s always room for more who want to fundraise for such a great cause. The ride creates over $1.5 million in value for the local economy from people who stay, eat and enjoy the region. This charity has raised over $5 million to childhood cancer research, over $4 million from the Snowy Ride over 14 years. Thredbo Accommodation The Lantern Apartments is a convenient location for Snowy Ride 2014 as guests can stroll around the village and enjoy a few drinks without worrying about getting behind a wheel to drive. Extend your stay for the whole week and also enjoy some great bushwalks, fishing, mountain bike rides, meals around Thredbo and other great activities. Or come back another time, just call Ian and Jill to tee up availability for a getaway over the summer.
Mountain Bike 3 for 2 Package Get On Your Bike: Over 50s Will Love These Thredbo MTB Trails