bookings@lantern.com.au
02 64576600
Oktoberfest Thredbo: Get the Low-down on Lowenbrau
October 10, 2014
Have you walked past the Bavarian beer halls in the city and seen some strange sights? Men in long socks, women in seemingly provocative Wench's outfits, all ?drinking seemingly oversized beer tankards? It?s Bavaria?s Oktoberfest and the festival just hit Thredbo over the October long weekend (October 4th and 5th), and was another great reason to head down once the snowsuit hordes headed for home. [caption id="attachment_7437" align="alignleft" width="300"] 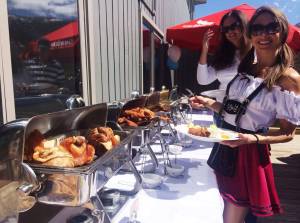 Image source:
Thredbo Alpine Hotel[/caption] Two hundred and four years ago a festival was created to celebrate the Crown Prince of Munich?s marriage. To this day, the festival still goes on every October. In Munich (a state of Germany) the festival goes for 16 days, but in Australia often the celebrations concentrate over the October long weekend we enjoy here as a public holiday weekend. Walk into any Oktoberfest celebration worldwide and the blue and white Munich colours are flying, walls and ceilings are festooned with streamers, and specially brewed beers just for Oktoberfest are the focus of the drinking action. These beers are slightly higher in alcohol content and are called ?Lowenbrau? (Lion?s Brew) amid other beers that are brewed according to special ?German beer purity laws. For those unused to drinking beer or hesitant to drink heavy beers, the Lowenbrau is surprisingly refreshing and light in taste. Quite drinkable by many of us who don?t usually turn to beer as our first choice. The beer sizes are traditionally ?generous?, which cuts out repeated trips back and forth to the bar. Nick from Thredbo Alpine Hotel, the venue for this Oktoberfest, says ?Saturday down at Thredbo was a beautiful day. The Lowenbrau beers were flowing, and over 100 people were out and about in the sunshine enjoying a Bavarian BBQ which including German sausages, Kranskies, rumball desserts and more.?Popular local DJ from Jindabyne Jay Hayden played some tunes (covers), the environment was very relaxing?. What a perfect spot to try Lowenbrau beers in such a pristine open air location. [caption id="attachment_7438" align="alignleft" width="300"] 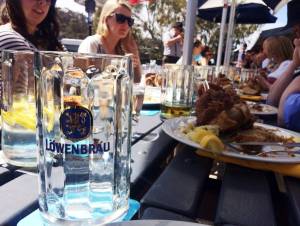 Lowenbrau is the beer to drink at Oktoberfest[/caption] On Sunday at Thredbo, the celebrations continued with a long lunch out on the pub bistro area at the Thredbo Alpine Hotel. Seventy two guests paid $40 each to enjoy an all you can eat buffet, complete with 3 different types of schnitzel, sauerkraut, black forest cake, steins of beers, a shot of schnapps and oodles of German music. Ten to fifteen ladies dressed up in traditional dress for the occasion to lend to the spirit. The Lantern Apartments in Thredbo provided convenient Oktoberfest accommodations for those enjoying the celebrations. If you stayed at the Lantern Apartments, it was a short walk around the village to enjoy your Lowenbrau without the need to drive home. If you're planning on doing some Thredbo summer activities such as mountain biking, contact Lantern to discuss your needs for Thredbo accommodation.
How You Can Turn Yoga Poses Into Mountain Biking Fitness…Almost Instantly Thredbo Summer Season 3rd Night Free