The L.O.T.Index Peaking[/caption]It is always hard to tell exactly how much snow fall we get in Thredbo Village out of any one storm.? You need to find a reliable indicator that always delivers a consistent story without being affected by wind.?? At the Lantern Thredbo Apartments we have been relying on the Lantern Outdoor Table (L.O.T.) index for over 2 decades as our "go to" indicator for snow depth after a storm. The snow falls?we have had over the past 2 weeks?are the some of the best I have seen in June and? as you can see from the photo of the L.O.T. Index ?here?we have had a real LOT of snow. Fingers are ?crossed for a LOT more soon but ?the snow depth we have right now is better than August last year so we are off to a very good start. Since the last fall we have had some cold nights so snow making has continued throughout the week, building on the cover on the lower half of the mountain. Probably the best friend we have had with these storms is the strong winds that help to blow massive volumes of snow from the main range, into Thredbo and leveraging our snow cover dramatically. [caption id="attachment_6963" align="alignleft" width="300"] 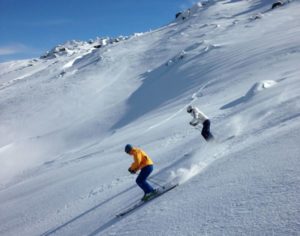 Baz and Jules Ski to Dead Horse Gap[/caption]Jill skied on Tuesday this week and ended the day with a 'Dead Horse Gap" tour which is a run that needs quite a lot of snow down below 1500m. ?She said it was better now than any time last season and the images people are posting online tell the story of some great early season cover. [caption id="attachment_6958" align="alignleft" width="300"]

Snowy Hydro Spencers Creak Snow Depth[/caption]There is?some more snow forecast this coming weekend and the forecasters are tipping another decent storm next week that could bring in another LOT of snow. ?The way things are going this season we may have to buy some tougher outdoor furniture. ?However we are not complaining , Thredbo winter 2014 is shaping up?to be a beauty. If you are interested in tracking the snow depth with someone who knows what is going on you can always head to the Snowy Hydro Website.?? Snow accumulation for Snowy Hydro Corporation ?is money in the bank as they use the melting water over summer to produce electricity. ?The chart on the left compares the snow depth from 2013 (in blue) to this season (in red). ? You can view these charts and make your own comparisons ?on the Snowy Hydro website. We still have some vacancies ?with mid week and weekend gaps and some midweek and weekly specials in July?so if you haven't booked your snow trip it is not too late.. And remember, when you think snow, think LOTS. ?That's the way we like it.
Thredbo July Weekend and Midweek Deals on now. Thredbo Winter Weekends