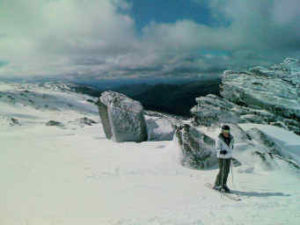 [/caption] You may have heard the term "Backcountry Skiing."? This is where you? put on some cross country skis or a pair of alpine skis with touring bindings and then head out into the wilderness until you find a nice steep hill covered in snow.? At this point you ski down? making whooping noises because it is (hopefully) covered in untracked, easy to ski, snow perfection.? When you run out of snow,? you turn around and climb back out and then do it again. Now if this is sounding like hard work? you might be more interested a distant relative of "Backcountry Skiing" called,? "Slackcountry Skiing".?? As the name suggests, this is where you head out into the snow covered wilderness (sort of),? find some snow perfection and then ski down making the aforementioned whooping noises.? However, and this is the important part,? your "Slackcountry run" is cleverly chosen so it will finish near a road where you can have a car parked to take you back to the ski resort from whence you came.? This way you can ride the chairlift up and leave the climbing bit out. Thredbo is? fortunate to have one of Austraila's best "Slackcountry" runs called the Dead Horse Gap Run.? Dead Horse Gap is the high pass on the Alpine Way near Thredbo located just? before the road drops? down towards the Murray River,? 1000m below.?? One of Thredbo's great snow season treats is to ride to? the top of the resort on Karel's T bar and then ski out to the Ramshead Range before skiing down through the snowgums to Dead Horse Gap.?? This 5km run? is a great way to experience the tranquility of skiing on the main range without having to hike to get there...and if you are well organised you will have a car parked at Dead Horse gap with picnic supplies or possibly even a beer. [caption id="attachment_1255" align="alignleft" width="300" caption="Fresh Tracks on Ramshead for Ross and Jules"]

[/caption] It is important to remember that this is backcountry skiing and all too often people get lost due to poor weather and lack of local knowledge.? So always go with an experienced guide if you don't know your way. ? It is not always possible to do this run once the weather warms up in spring but we had great conditions yesterday for a run to "Dead Horse" with 10cm of powder snow on the top and some creamy smooth spring snow on the bottom.? There is still plenty of snow down low so I am sure we will get a few more trips in before the end of September.? I have included a few photos here, excuse the quality but I left the camera at home so? these were taken on my phone.
5th Night free School Holiday Special Spring Season Specials