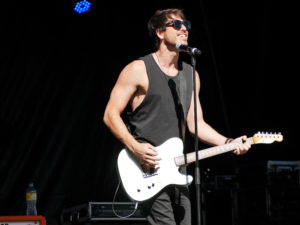 Country music is back in the Snowys! An amazing line up of talent is back for the Snowy Mountains Country Music Festival in 2016 with an amazing line up of talent. On Saturday 5 March at Friday Flat, the main stage concert will feature ?performances by headline acts Kip Moore and Kelsea Ballerini, as well as?Daryl Braithwaite, Morgan Evans, Amber Lawrence, Adam Eckersley Band, Deep Creek Road, The Weeping Willows and Little Georgia. Kip Moore?'s ?Wild Ones" recently debuted at #2 on the US Country Albums Chart and #4 on the Billboard Top 200. Hailed by the Huffington Post as ?one heck of an album? set to produce hit after hit after hit" while The Guardian described it as ?an impressively singular release from Music Row..unlike anything else in country music at the moment". Renowned?for his blistering live shows, Moore is currently touring the US where the list of advance sell-outs is stacking up including dates in Boston, Toronto and a two night run in Chicago. Kelsea Ballerini Debuting at #1 on the Billboard Country Charts,?"Love Me Like You Mean It" has made her the first female country artist to score a #1 hit with her debut single since Carrie Underwood in 2006, and only the eleventh in history to achieve the feat. Noted?by many as ?the new Taylor Swift her follow up single, 'Dibs' quickly became the #1 most added song on US Country radio upon its release. Recently announced as finalist for Favourite Female Country Artist at the American Music Awards and Female Vocalist and New Talent of The Year for The 49th Annual CMA Awards Ballerini is currently headlining CMT?s inaugural ?Next Women of Country Tour throughout the USA. Daryl Braithwaite is one of the quintessential voices of Australian music whose incredible?40 year career has provided us with a slew of memorable hit singles and timeless gems. A consummate performer, Braithwaite continues to sell out shows around the country thanks to songs such as "One Summer, "As The Days Go By' and inimitable "The Horses" plus charting topping hits from his days fronting Sherbet, such as "Summer Love" and ?Howzat" that have become bonafide Aussie classics. Set?to be a fantastic weekend in a natural amphitheatre with stunning surrounds, get in early and take advantage of early bird prices on tickets and accommodation. There is a lot to do in Thredbo in summer and concert goers can also enjoy amazing walking and bike trails, fishing and bobsledding. Take advantage of the Early Bird sale ?and SAVE. Sale ends midnight November 30th. Don't miss out. Get your tickets here: https://www.thredbo.com.au/countrymusicfestival/tickets/
2016 AUSTRALIAN INTERSCHOOLS MTB CHAMPIONSHIPS WANDERLUST