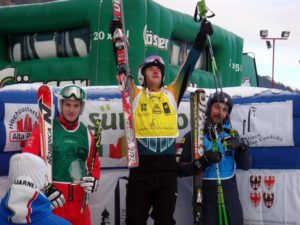 Scott Kneller wins Australia's first ever Skier Cross world cup event[/caption] The Winter Olympics are on again and the Australian team is the biggest yet with 56 Athletes. ? ?With 9 of those competitors coming from the Snowy Mountains it is an exciting time for us and we will be glued to the coverage of the games over the next 2 weeks.
The local competitors from the Snowy Mountains include Olympic gold medalist Torah Bright from Cooma who will be defending her title in the women?s half pipe and also competing ?in the boarder cross and Slope-style events. ?Fellow team-mates Scott Kneller, Sami Kennedy-Sim and Jenny Owens will compete in the Skier Cross and ?Russ Henshaw in the mens Slope-style events. ?Sister and brother ?duo ?Aimee and ?Callum Watson will compete in the Cross Country events and in freestyle skiing ?Samantha Wells ?will tackle the aerials and Nicole Parks hits the Moguls.
Cooma?s Torah Bright was on skis at the age of two, snowboarding at 11, and had turned professional by the time she was 14. ?Her gold ?medal at the Vancouver Olympics secured her place as one of Australia's snow sport legends. Sami Kennedy-Sim, ?whose parents own the Guthega Pub, ?specialises in skier cross and came fourth ?in her first World Cup this season after a struggle back from illness last year. Russ Henshaw has been a a winner and podium dweller on the X Games circuit for years. ?He is on the road back from knee surgery and is a serious medal chance for the new Olympic sport of slope-style. Nicole Parks ?is in her first Olympics in the moguls event. Thredbo skier?Scott Kneller did very well in Vancouver games as a 19 year old newcomer in the sport of skier cross. ?He suffered ?back injuries from a crash in December and a family crisis that would stop most in their tracks. ?The fact that he is on the team is a testament to his commitment and his abilities. ?He ?is working hard to get a thumbs up from a medical assessment on February 10th which would clear him to compete ?at Sochi. The Watson twins will be competing in the cross country events and are the first brother and sister to compete at the winter games for Australia. ?Another Perisher based skier Alex Almoukov ?will compete in the Biathlon which is a combination of cross country skiing and target shooting.

There is no question that these games will be ?exciting ?for Australia and certainly for the Snowy Mountains. ?There are many other talented athletes from the area that did not make the team for these games. It is hard work to get on to the team and luck plays a part with injuries a real factor. ?The cost to all the competitors ?is significant and the commitment of their family and friends to get them there is extraordinary. ?We wish them all the best and hope to see some Snowy Mountains locals on the podium. ? You can find out more about the Australian team here:?sochi2014.olympics.com.au

We also have a special package available during the games to inspire people who have never taken up snow-sport to have a go. ?If you want to learn to ski or snowboard this is the deal for you. ? The Package is the the The Winter Games Learn to Ride Free Special ?which includes 5 Nights accommodation , 5 days lift pass, ?free lessons, equipment hire and leisure centre access from only ?$789 per person twin share or even less for groups. ?Find out more here: