bookings@lantern.com.au
1800 020 598
Thredbo Jazz 2016
March 15, 2016
The Thredbo Jazz Festival is just around the corner and it is a fitting way to wind up a huge summer of events in Thredbo.?Book here ??Thredbo Jazz 2016 has a powerful line up with some Australian Legends, overseas stars and some incredible new talent. ? Headlining the program this year is the Australian-Polish guitar Legend George Golla (OA) who has played with absolutely everyone (at least twice). Some notable names George has performed with include Stephane Grapelli and Dizzie Gillespie. In a career that is approaching 70 years of performing, highlights include winning the first ever Jazz Aria award and his very long partnership with another Australian legend Don Burrows. George will be playing ?in Thredbo with ?vocalist Jackie Cooper another Australian Jazz Icon.

John Morrison big band drummer extraordinaire ?will perform with his SBF Student All Star Band. ?Stephan Magnusson is another virtuoso guitar player at the Festival who performed in Thredbo last year with Katie Noonan and Elixr. Stephan is back again ?to astound audiences with his gifted, insightful playing. He is a must see performer at Thredbo. Mahalia Simpson came to fame on the talent show X Factor. ?Her highly acclaimed performances brought this shy 22 year old onto the national stage and she has never looked back. ?With an Samoan/New Zealand heritage she has music in her soul and a passion for gospel performances. ?Also at Thredbo this year Clayton Doley is a Pianist/Hammond Organ player of international renown. ?Splitting his time between Australia and Canada Clayton has performed with many greats in the R & B world including one of Thredbo's favourites the late, great Jackie Orzacksy. ?If you like some grind in your soul then Clayton is the man. [caption id="attachment_11117" align="aligncenter" width="594"] 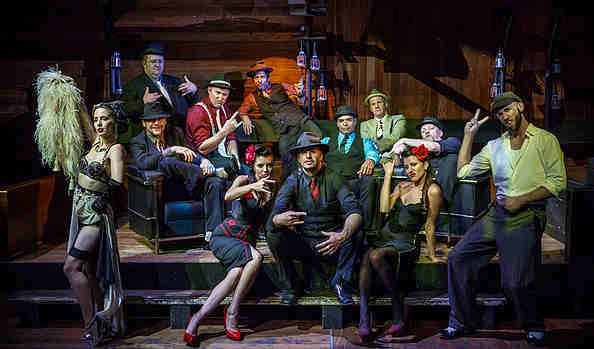 The Big Ol Bus Band Coming to Thredbo[/caption] On a different tangent?for Thredbo Jazz 2016 ?the Big Ol Bus Band is a 10 piece band with serious credentials and penchant for some down home New Orleans style partying. ? On a similar mission to liven things up Don Hopkins will be at the festival taking his bluesy piano party on tour for the weekend. Back at Thredbo for the first time in a while ?is the pianist extraordinaire John Harkins performing with his formidable trio, ?Brendan Clarke on Bass and the unstoppable Andrew Dickeson on drums. ?To really liven things up for Thredbo ?Dale Barlow will also perform with John and the boys over the weekend. This is a quartet of world class players and they should be top of your list this year. ?Another exciting jazz trio ?in the village for the festival is ?the ?Nichaud and Mark Fitzgibbon Trio bringing Nichaud's velvety jazz stylings to some classic arrangements. If you are looking for that quintessential Jazz vocal Nichaud will deliver. [caption id="attachment_11118" align="aligncenter" width="717"]

Nichaud Fitzgibbon brings jazz style to Thredbo[/caption] The Blues Point Vocal Club will also be singing up a storm at?Thredbo Jazz 2016 with ?Lorraine Silk, Lauren Dawes (The Voice), George Washingmachine, Dan Barnett ?and Craig Scott ?joining their considerable forces. They will perform unique arrangements from Gershwin, Ray Charles, Stevie Wonder and others. ?If you are looking for some Latin Passion then Chukale will be in Thredbo and if your haven't heard of this 13 piece Afro-Cuban Salsa ensemble then you are in for a treat. ?Just try to keep your feet on the floor with this band on stage. Also coming to Thredbo Jazz?2016 are the Old Favourites Nairobi Trio, and George Washingmachines Feel the Manouche. ?Ambushing festival goers with a wall of wonderful sounds?the Three Handed Bandits?play Thredbo for the first time. ?The driving jazz of Hammerhead is back along with?The Dixie All Stars blowing up a storm. Thredbo's prodigal party band Phsyco Zydeco are back after a break ?with their own take on what you should do when someone picks up an piano accordion. Mannie Aigner, ?the Snowy Mountains own guitar great will be performing in Thredbo as well. This is a chance to catch Mannie ?in a reflective mood when he is not driving the groove for the ?local legend R&B outfit the Hip Replacements. Thredbo Jazz 2016 is on ?from Friday April 29 to the early hours of Monday May 2nd. ?You can book the Thredbo Jazz ?Package here with a full weekend festival pass and ?our 3rd night free accommodation deal from only $350 per person (twin share) or from only $250?(quad share). Book online from our Thredbo Summer Action Packs or just call the office on 1800 020 598.
L’Etape Australia by Tour de France Wanderlust: Separating Myth from Magic
Follow us on instagram
This error message is only visible to WordPress admins