bookings@lantern.com.au
1800 020 598
L’Etape Australia by Tour de France
March 15, 2016
L'Etape Australia is back again for 2017.? After a very successful launch in December 2016, organisers are tipping 5000 riders to take to the roads around the high country on December the 2nd.? ??L'Etape means "Stage" ?as in the 1st stage of a race. ?This is an event run by the Tour de France ?to take their world beating style of bike racing to the world's mere mortals to give us a taste of what it is like to be?Simon Gerrans?? or Chris Froome .?Australia? is the 3rd country and the only one in the Southern Hemisphere, to host L'Etape. [caption id="attachment_12562" align="alignleft" width="1024"] 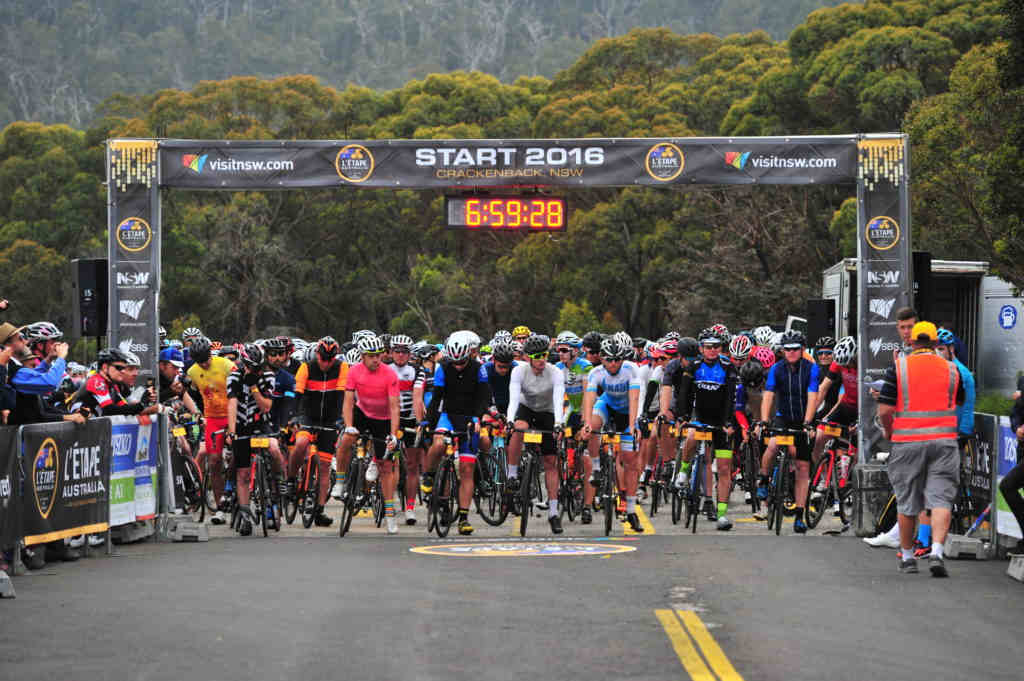 Seconds before the 2016 start of l'Etape[/caption] But what does that mean you say? ??Thousands of amateur riders testing themselves under ?world class road racing conditions, just like the Tour de France. No cars, no oncoming traffic, no?stop signs, nothing to get in the way of??no?holds barred bike riding, except maybe a few shirtless, goon bag swinging?supporters running alongside cheering you on. It means that the same people who stage the?Tour de France will run 2 events in the Snowy Mountains on the weekend of December the?2nd this year.?The??events will be run under professional conditions for amateurs with full road closures, a challenging route planned by the crew for La Tour and for ?Tour de France fans, the event will ?include a Sprint Stage and King of the Mountain with the coveted green and polka dot jerseys up for grabs. ?If you haven't yet watched the Tour de France on SBS in July then you may not be aware of the scale and spectacle of the event with hundreds of cyclists racing ?across the beautiful French country side, pedaling up to 200km a day at averages of close to 45km per hour. L'Etape will create something similar here but targeted at amateur riders who want to experience the same riding?conditions as the professionals in France. ?L'Etape has chosen a course and there will be two events running simultaneously. ?The "Race" is a longer, more challenging event and the "RIde" is a slightly shorter and less gruelling ride, still run under the same full race conditions. Organisers are tipping thousands of people will ride in the event. [caption id="attachment_12564" align="alignleft" width="1100"]

The Strzelecki Statue in Jindabyne dressed in yellow for l'Etape[/caption] The course begins at the??Ski Tube car park, 10 minutes from Thredbo. ?From there riders follow the Alpine Way down to Lake Jindabyne and then head back towards Cooma on the Kosciuszko Rd. ?Just past East Jindabyne the riders will head off on the fabled Rocky Plains Rd, a favourite with local riders. ?The course then veers off??in a loop back around to Berridale for the Sprint Stage before riding out onto?the?Monaro High Plain through Dalgety and over the Snowy River. ?Not far from Dalgety things get serious with the King of the Mountain Stage up the Beloka Hill, a punishing little rise that defies all but the most tenacious to stay on the bike, with gradients as steep as 17% the fastest up this hill will deserve the Polka Dots.?From the "Col de Beloka" the route returns?to Lake Jindabyne where the "Ride" will finish. ?The "Race" however continues back along the Kosciuszko Rd all the way to Perisher Valley and the final grueling climb over Dainer's Gap and " La Col' de Perisher before the finish. The Ride will cover a distance of 126km and the Race will be 156km. ? You can see full course detail on the L'Etape website ?including routes and ride elevations.? Last year the townships around the mountains really go into the spirit of things? dressing up their towns in the respective jerseys for the event.? Jindabyne and surrounds was bedecked in yellow for the Yellow Jersey of the overall winner,? Berridale was covered in Green for the sprint Jersey and Dalgety went red and white polka dots for the king of the mountain.? ?These colours are already appearing again this year.? It is a great start to what looks like being a busy summer season in the mountains.???Vive Le Tour! Vive L'Etape! [caption id="attachment_11093" align="alignnone" width="1024"]