bookings@lantern.com.au
1800 020 598
Thredbo Staff Reunion 1980’s
March 11, 2016
Think the B52's Midnight Oil, Men at Work, Funky town, Michael Jackson, Eye of the Tiger, Madonna, Joan Jett, ?Jimmy Barnes, Boy George and Devo. ?Add some big hair and serious mullets, tight jeans in the harry high pants style and shoulder pads. ?Blend that with long skinny skis, loud flouro ski suits, glow in the dark headbands and white framed sunglasses and you are starting to get a picture of Thredbo in the 1980's. ?Many people were affected by that time in Thredbo and there are quite a few still in the village, trying to recover!.??Hundreds more are coming back to the Village on the Weekend of March 18 and 19 ? for the Thredbo Staff Reunion 1980's. [caption id="attachment_11079" align="alignnone" width="800"] 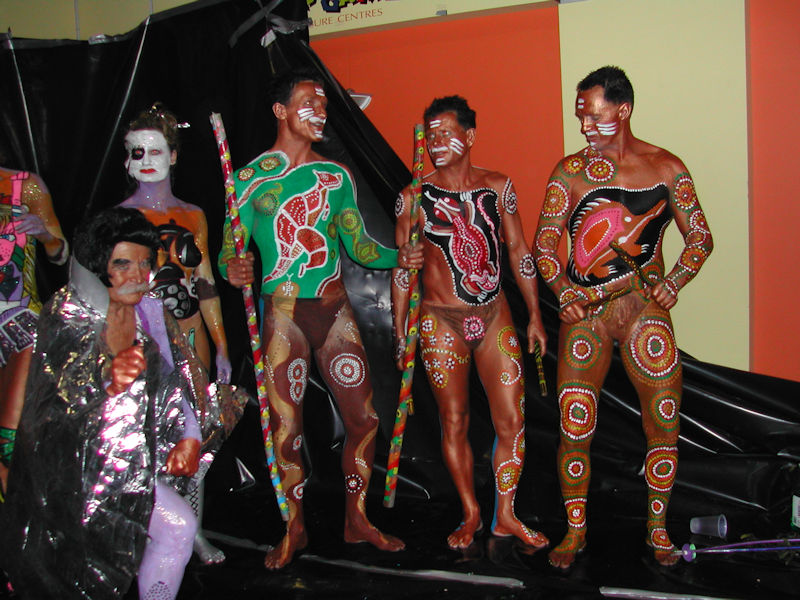 Alien Snatched Elvis Visits the Dreamtime in Thredbo Body Painting. Yep... that is what I said.[/caption] This weekend will be a chance to rekindle the fire and bring the flouro back one more time. The Thredbo Staff Reunion ?doesn't have any specific timetable. ?From 2pm on Friday people will start to gather in the Bistro at the Thredbo Alpine Hotel and the reminiscing will be begin, and there is a lot to recall. The Thredbo local groove machine the Hip Replacements will resurrect the Keller Bar ?of old on Saturday night and then by Sunday morning, nothing will bring anyone to life. Thredbo in the 1980's was a pumping little village ?The biggest season ever for snow depth was 1981 with a 3.5 metre base on the mountain. Many who worked that season in Thredbo never left and are still waiting for the next big one! The village was full of people from all over the planet working the winter downunder. Austrians, Swiss, French, Canadians, Americans even Columbians! A Thredbo tradition from the early days was Carnival Week. ?This was a week long party at the end of the season to celebrate the winter past and the summer to come. Many village workers formed teams and competed throughout the week for individual glory and the "Carnival Week Cup". ? Some carnival week classic events were: Greasy Pole Competition. ?2 combatants slide over the Alpine Hotel Pool (not heated in those days) ?with wet pillows and proceed to bash each other around the head until someone falls into the icy depths. Needless to say hundreds of village staff would congregate with beers and cheers to spur on the contest. The Billy Cart Race. ?Teams spent weeks building elaborate vehicles that were then dragged up Banjo Drive just down hill from the Lantern Driveway. They would then take timed runs down,through?the Village, or the safety barriers depending on driver skill and build quality. ?Billy Carts took on all shapes from high speed race machines, to steel girder death traps with wheels or even ?3 seat sofas with steering and a harem. Body Painting. ?This was the Carnival Week Favourite with teams stripping off to their briefs?and having their whole body painted in ?theme for their act which was a cabaret style performance in front of a huge audience. Acts could involve dancing, acting, political commentary or just outright lunacy. ? The winning team invariably spent the prize money on ?a party. There were plenty more events including the Hot Shots Derby, a ?no holds barred careen from one end of the mountain to the other and back, the Best Barman Cocktail Competition (The more standard drinks you can fit into a glass the better) street parades, frock footy and parties every night. To get a feel of Thredbo in 80's check out?this Video Invitation from Adam Digby, it says it all. The 2016 THREDBO REUNION from Adam Digby on Vimeo.
Cannonball Festival Wrap L’Etape Australia by Tour de France
Follow us on instagram
This error message is only visible to WordPress admins