bookings@lantern.com.au
1800 020 598
The Dos and Donts of Climbing Mount Kosciuszko
February 19, 2015
It?s as old as the hills but it?s the new ?thing to do? climb one of the world?s 7 summits (highest summit on each of the seven continents). With a height of 2,228 metres (7,310 ft) above sea level, climbing to Mount Kosciuszko's summit is one of the best summer activities in Thredbo. So make the Lantern Thredbo Apartments your base camp and get together with a mate or as a family, it's just six hours from your front door, if you?re in Sydney. This is one of the great walks of Australia and to make it even more special my family and I did it on Australia Day. We loved the experience of climbing Mount Kosciuszko but it is well worth reading about both the thrills and the caveats before embarking, to avoid some of the common pitfalls and help you get the most out of your experience.

I had no idea the sound of water would be a constant sound along most of the route. At times it was just a gentle tickle of a brook or little stream. Other times the water seemed to rush and roar in larger sized riverlets and waterfalls. [caption id="attachment_7991" align="alignleft" width="300"] 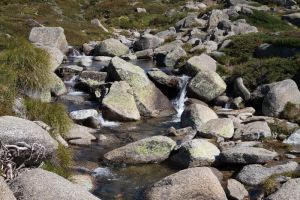 Mt Kosi stream[/caption] To look at water and to hear it is to be soothed and relaxed. It is a walking massage, I always think. That?s why people flock to water in all its forms. From the lookouts along the route you can also see?the?beautiful lake Cootapatamba, an intriguing and inspiring Alpine Tarn tucked ?in below Kosciuszko's South East Ridge. It is true wilderness out there once the top of the chairlift is left behind. There are very few man made structures once the last T-bar structure is out of sight, just rolling brown hills covered in dense green vegetation as far as the eye can see. It is very easy to see how people can perish out here, as well as appreciate the appeal of early exploration. The backcountry is laid bare here. For my husband, an avid off piste skier, it was eye candy heaven. At times he stood in wonderment salivating at steep slopes further out. [caption id="attachment_7992" align="alignleft" width="300"] 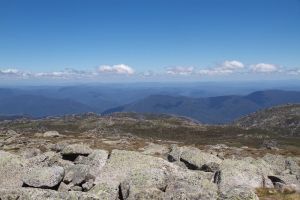 View from one of the lookouts[/caption] In the city we can be out of touch with this country?s Aboriginal heritage and influences. This particular walk draws you in very quickly to the legends and influences of this special place. There are lots of signs explaining significant aboriginal landmarks and legends, and all walkers enroute stood to read these and take it in. Standing out in the elements, particularly in the wind and the sunshine we were drawn into the stories. The children as well as the adults. There are several good lookouts along the route. Lake Cootapatamba Lookout is spectacular to just stand and gaze out at the lake. If ?climbing?the summit was out of a walker's reach due to time constraints or physical reasons, the lookouts would be great turnaround points. A couple of groups of seniors had the right idea and just aimed for the first lookout 15?or 20?minutes after leaving Eagles Nest. This is the Kosciuszko Lookout and it gives walkers the first view of the Summit and a sweeping view of the headwaters to the iconic Snowy River. What a beaut way to spend a morning.

Preparation for the Mt Kosciuszko climb was something we did not do. We did not stretch our legs and did not dress for the conditions and we did not prepare to get sun burnt. All would have been well received had we put a little time and thought into these three things. [caption id="attachment_7994" align="alignleft" width="300"] 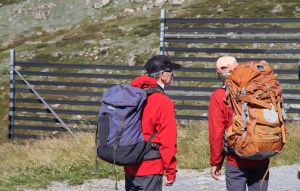 Hikers kitted out in appropriate gear (unlike us)[/caption] As a disclaimer on my level of fitness I ran my first full marathon in September. Even so, I was sore after hiking to Mount Kosciuszko for the following two days. The physical aches and pains were the culmination of a few factors and not just one particular thing. I had not researched the distance at all and somehow got it into my head the Summit was not too far above Eagles Nest. Hello? Had I researched properly I would have discovered it was 6.5 km one way and 6.5 km return to (Eagles Nest to Summit). The total distance is a equivalent to walking the ever popular Sydney City to Surf, less 1 km. Not an overly massive walking feat but not something to embark upon under prepared. At the very least we should have all stood for a few moments stretching our calves, shins and arms. The path is gentle and undulating and steel mesh all the way but I could feel the stretch in all parts of my legs because it meant I was using and working the muscles. However, I did welcome the exercise. [caption id="attachment_7914" align="alignleft" width="300"] 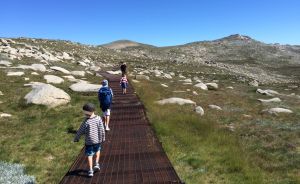 Heading up Mt Kosciusko[/caption] We were not dressed for walking in mountains with unpredictable weather. My excuse is that I packed hastily in sweltering Sydney heat, preparing for a sweltering January in Thredbo, not for a minute imagining wearing anything other than shorts. For someone who can?t go a day without consulting weather apps on the smartphone, to say it was a complete balls up and oversight would be understatement of the year. It was only as a last minute gesture that I even ducked back to the house to grab everybody a sweatshirt. Everybody else doing the?Kosciuszko walk seemed to be kitted out in long trousers or pants, some kind of wind jacket or snow jacket and all had a hat. Many had proper walking sticks. We may have been the only walkers without sunscreen. We usually wear sunscreen every day, with bottles stashed everywhere, it was Murphy's Law that dictated the one day I forgot to pack it we would all be sunburnt like crisp chips. [caption id="attachment_7995" align="alignleft" width="239"] 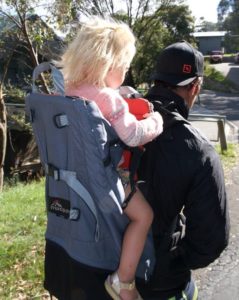 The special hiking backpack[/caption] The weather was perfect; the sky clear, sunny and inspiring. But after all, it was the mountains and the Snowy Australian Alps (minus snow) no less, so the wind chill at times was bracing. Bearable for the adults but challenging for the children. There were plenty of children doing the walk with their families but all seemed rugged up and properly attired. One couple brought their pram, which they said was ?fine? (just needed two for a couple of stepped sections) this way their baby could sleep and they could rotate their three year old into the pram when her legs got tired. Our 20 month old decided 1 km into the walk up that the special hiking backpack we put her in was not to her liking that day, so we took turns carrying her in our arms. My biceps have only just recovered. We could have turned back with the toddler at any time due to the fact she was cold, under-dressed, missed her sleep, despite wrapping her in a little blanket we brought along for the car trip and her sleeping horizontally in my arms. But the summit always seemed around the next corner and the older children were so excited and happy to be out in the wilderness doing this walk we didn't feel like squashing their enthusiasm. After all, this is one of the world?s seven summits. The chatter of the older children was about taking photos to show the class on their news day.

Would I recommend the walk for families?

Yes definitely. We have taken the kids travelling to some interesting places in the world and you can lead a horse to water but you can't make it drink in terms of making the kids excited about a monument be it just historically significance or culturally beautiful. [caption id="attachment_7996" align="alignleft" width="300"]

Improvising with a toddler[/caption] This Kosciuszko walk struck a chord with my kids. They just got it. They got the wilderness, they got the challenge, they got the special experience, they totally got it for themselves and not from us shoving it down their throat. They even received certificates down the bottom of the chairlift that ?said ?I climbed Kosi on Australia Day? with space to write their names. They took the certificate and the Thredbo stickers and the photos to school. They are so proud of themselves. It genuinely feels like a great life experience we have given them. I know of a family who piled their children in the car at 3am from Sydney to start the walk at 9 am and drive home. I would not recommend doing that because it's a tiring day, but the dad had climbed Mount Everest at age 22 and also saw the value in the experience for his children. Many of us are seeking experiences for our children that will teach them that it's a big world out there, give them resilience, and a sense of achievement within themselves. [caption id="attachment_8000" align="alignleft" width="300"]

Nearly there...[/caption] Our six year old decided the walk was not for him 4 km up the hill. We carried him for 500m to give his legs a rest, gave him water, a little pep talk about how brave he was, bribed him with the promise of a treat when he got down (specially reserved for middle of the wilderness desperation). We coaxed him up the last leg to the summit after a special Australia Day BBQ near the last section and he had a big rest at the top. Psychologically reaching the top and being downhill all the way home made a big difference to him. He skipped and sang and smiled all the way back to Eagles Nest. Out of all the kids, he took the most stickers and asked for most photos to take to school. He hasn't stopped talking about the walk. I recommend taking a backpack with suitable food and snacks and water. Other walkers had little water packs with a clear tube in grabbing distance to their mouth that they took little regular sips from. Luckily, we packed sandwiches and boiled eggs and water bottles. And nappies. Australia?s highest nappy change it was indeed. And fruit. Heaven help us if we forgot, as we were far from any shop up there. [caption id="attachment_8003" align="alignleft" width="300"]

At the top of Mt Kosi's summit[/caption] In your preparation take note of the distance, warm your legs up, take sunscreen, wear hats and suitable attire. Be sure to tell somebody where you are going, make sure your children are either great ages for walking or you have something to carry them in. Take a day or two either side of the walk to enjoy Thredbo village. The Pub Bar & Bistro has kids meals and colouring in, as does Bernti's Grill. Give the kids a big run around on the Village Green or in the playground near the duck pond the day before or after. Make sure you stay at one of the Lantern Thredbo?s family friendly self-contained apartments. Ask Ian or Jill ?for the apartment that will best suit your family. Most??apartments have a car space, somehavee a barbecue on the verandas, some are higher up the hill and some are closer to the base of the mountain. There is a summer special which is three nights for the price of two. Get up there and get climbing Mount Kosciuszko. You?ve only got one life, live it well. Albeit with sunscreen and a hat.
Lantern Thredbo Apartments Guide. Holiday Accommodation Youll Love Thredbo Flow Trail. Mountain Biking From Top to Bottom
Follow us on instagram
This error message is only visible to WordPress admins