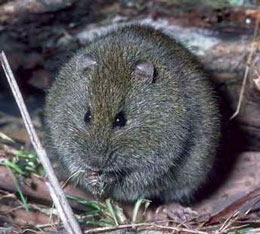 Broad Toothed Rat , a Kosciuszko Fur Ball[/caption] Summer Snow drifts are not uncommon on the high country around Thredbo although after what most people would describe as a mild winter, it is a little surprising to see some quite large drifts on the mountain lasting well into the start of January. ?The ?retreating snow in the high country is always worth a visit, ?just be careful if you have to leave the main tracks like the Kosciuszko Track ?as the native vegetation is quite fragile and too much foot traffic can do quite a lot of damage. One thing that you can often see near the edges of a melting snow drift are the Alpine Marsh Marigold, ?a unique wildflower that ?grows under the melting drift as the sunlight filters through. ? ?You will also see plenty of insects accumulating on the drifts and you may even spot one of the local furry critters like the native broad toothed rat running around on the drift cleaning up the bug smorgasbord. If the drift is big enough you might like to get into a little bit of snow sliding action, particularly if you have kids around. ?This can be a hoot but there are risks. Summer snow pack can be quite firm and if overnight temperatures are cold it can be very slick. ?While sliding down a snow drift on a garbage bag or a back pack can be blast, ?you have to make sure that you can stop safely and there aren't some lurking Kosciuszko Granite Boulders waiting at the bottom of the drift as a less than forgiving backstop. ?You will probably still see some snow drifts ?throughout ?January on the track from Thredbo to Mt Kosciuszko and on the Alpine Lakes Walk around from Charlottes Pass. [caption id="attachment_5990" align="alignleft" width="300"]

Summer Snow Drift on the Rams-head Range[/caption]
Thredbo Blues 10 days to go. Christmas & New Years Carnival
Follow us on instagram
This error message is only visible to WordPress admins