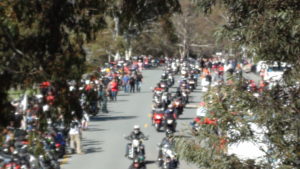 The Snowy Ride is Australia’s largest community motorcycle event and after 11 years it is still going strong.  Organisers were stunned last weekend when against their expectations over 3100 riders signed up for the event.  After a huge turnout last year for the 10th anniversary they didn’t think the 3000 barrier would be broken again so soon.

Riders were rewarded for their support with picture perfect weather on Saturday for the mass ride into Thredbo (see our video) .  The event is organised by the Steven Walter Fund to raise money for childhood cancer research.  Steven Walter was a keen young motorcycle rider who lost his battle with cancer and in his last days, asked that something be done to fight the disease that took his life.  His mother Sue and friends started the Snowy Ride to raise money for the cause and it has gone from strength to strength,  raising in excess of $4 million since it began.

The Lantern Property group donates to the ride every year.  If you would like to donate go to:  http://snowyride.org.au/

Thredbo Resort offers a range of summer activity passes to give you better value for money on your Summer Season holiday in Thredbo.The Summer Activity pass includes the following activties.Unlimited rides on the Chairlift to access the start of the Koscisuzko Walking track andthe rest of the trail network...

Thredbo offers a variety of kids activities.The Thredbo Early Childhood Centre is also open to provide occasional care for the younger family members.Kids Club Night AdventureThis adventure has the children armed with torches searching the bush for wombats, possums and anything that goes bump in the night! (6-12...

What our clients say

It was very easy

Loved it everything you need is there It was very easy

I saw the view. That’s all we needed

I saw the view. That’s all we needed It was great with excellent value. The new renovations in no 29 made it feel like brand new and fresh. The crows were very friendly. I think Thredbo has it covered. Every time I come it gets better.

Coming to Llotsky is like coming home. It is always so clean and lovely and we will be back off course! Thanks for another lovely stay! My parents also enjoyed themselves so much! Can't fault the staff at Lantarn. They are all fabulous!

We had a great stay. The rooms were lovely with a great view and the staff were friendly.